When does a gathering become a movement? There were 27 out for an incident packed ride last night. It is incredibly social and very hard. You need to suffer to make it worthwhile. Put a lot in and you get a lot out. It was nice to hear Howard expounding the same views as me. He said that he can’t sleep on Tuesdays, he is too hyper. He has tried everything from hot baths to beer. But nothing brings him down from the Tuesday “high”. Beats drugs! 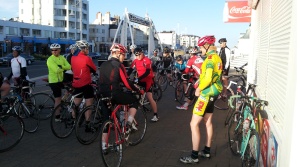 If you cannot stay with the fast group you must still follow the rules. Ride to maximum and then, the important bit, re-group.  Don’t ride the whole lap hard. Of course you’ll have a good workout but nothing more than the usual. It’s the intervals that make it an even better session. You will get faster and have more power for longer. Remember: stop, wait and then go for broke! When you are more experience the resting can be done in the bunch although some take this too far.

On the subject of rules, there are a few. Number one, don’t go through red lights. There is nothing that pisses drivers off more than anything than a cyclist flouting the law. I was even told that there are lights and “lights”. That is not the case. Red means stop for everyone. One of the great things about this mass ride is that it shows local drivers a nice side of cycling and we need drivers to be on our side.

Another rule is to concentrate at all times and be aware of what is going on around you. Many of the riders have never been in a road race and ride around with a “security in numbers” mentality. You guys have not seen or experienced the carnage of a road race pile up. It is messy, expensive and it hurts! Last night we had an accident, one guy calls out to say “adieu”, slows down and another clips his wheel. They both go down. Luckily it was just before the stopping point at Titnore Lane so it was slow. Although Howard will not agree with the lucky comment as his finger tips were virtually chopped off and he has to look after the kids this week.

Thanks to the guys that made me suffer but not to those that left me out front with no back up on a tough push along the sea front. My ride was cut short as I drove our injured mate home. I was looking forward to another blast into wind along the Prom.

The ride. Still using 25mm tyres and loving the speed, cornering and comfort. Back on the Cento Uno.