When you feel that magic… Scott Spark RC 900 WC review

Posted on February 20, 2017 by questadventure 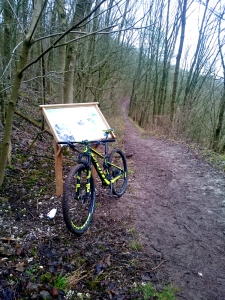 This was my second ride on my new Scott Spark RC 900 World Cup. The first was on a very wet and muddy trip following the South Downs Rough Ride route. I couldn’t really draw any conclusions from that other then it was a bit more comfortable than my Scott Scale 900 SL hard tail and about the same weight (10.2kgs). I had the shock set too firm, it needs at least 25% sag which is what I have now. The first thing about the next ride was that it was dry, still slippery, but none of the mud so as you can see from the pictures, cleaning only took a bucket and a half!

I headed up to Chanctonbury and Steyning with the motivation that to justify riding a World Cup bike I need to be able to jump. As the conditions were good the first thing that I noticed with the Spark was that it accelerated like my carbon wheeled Scale. It felt like a road bike when you’ve lashed out on a £1500 set of wheels. It was a joyful experience knocking off the Cissbury single track and then run up to the South Downs Way. I dived straight into the Lion Trail, whipped through the first few turns and then went down hard. I was looking way down the trail so have no idea why the front wheel slipped out so fast. I let some air out of the front tyre and enjoyed the rest of my warm up down to Mouse Lane.

I took the long climb to the top of the Steyning Horse Shoe woods. To this point I had not had any reason to use the Twinloc lever nor did I need it for this exhausting climb. Scott and riders make a big deal of this feature but I could not see the point. I rode the Blue run and then played around the Reds having a poor attempt at getting air. I need help. It was nice to feel arm pump on our local patch but the successive climbs took a toll and my legs got tired.

It was with great joy and excitement that I saw all the new information boards and markers explaining and directing all users of this beautiful part of the Downs. Congratulations and thanks must go to the Wiston Estate, The Steyning Downland Scheme (or Society) and all the Steyning Mountain Biking trail builders (even if they do say “No 29ers” Ha, ha). Well done! Awesome job! To you who left your rubbish by the look out: don’t be so selfish – take your crap home and chuck around your own house.

Scott Spark RC 900 WC, made for single track – up or down

Up to now the Spark had performed well but it really could have been any good light XC bike. I left the woods via Squirmy Rooter – the trail that runs around the rim of the Horseshoe. The Spark took off and flew. I’ve ridden this hundreds of time but never like yesterday. The Spark head angle is a slack 68.5°. Only a few years ago this would have seemed cutting edge on a trail bike. Oh how XC racing has changed. The confidence that the head gave and the active suspension meant  the bike felt as if it was on rails. It’s so light that jumping roots on corners was a breeze;  the bike could be floated up at will. The best way that I can describe my run was as if I was having a perfect blast through fresh snow (on skis). You feel as if you are flying. That’s when I felt the magic. I now understood all the effort that had gone into making this bike the Olympic Gold winner that it is. It is everything that I want out of a bike. It’s dynamite as an XC climbing machine and as much fun as any trail bike that I’ve ridden. Don’t bother checking my Strava time. It shows 15:50. Do your Instagram before the segment starts!

I described the spec in my previous review so this one is all about handling. I still think that I’d be happier on Racing Ralphs. I know that I get accused of being over excitable but this really is the best mountain bike that I have ever ridden. Why or why have I been such a hard tail fanatic? Finally, the Twinloc, it is very useful when sprinting or attacking a climb out of the saddle. The bike’s suspension is designed to be active over small bumps (the exact opposite of an Epic) which is fine when seated on a climb or flat but if you stand and want to get aggressive with your pedalling the Twinloc comes into its own. It’s like having two bikes rolled into one.

I’m happy. Now to get training and learn how to jump. Roll on the South Downs Way!